Just happened to came across a Flash game, Super Mario Crossover at Newground, I don’t usually like to play Flash game, I prefer it to be a downloadable game on my desktop, but this game got me hooked for some times. 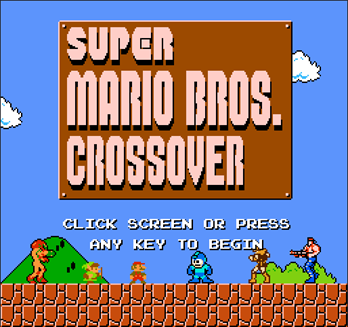 This game is based on Super Mario game we all familiar with, but instead of Mario alone, we can now choose from Samus from Metroid, Link from Zelda, Mega Man from Mega Man series, Simon from Castlevania, and Bill from Contra.

Each level starts with character selection 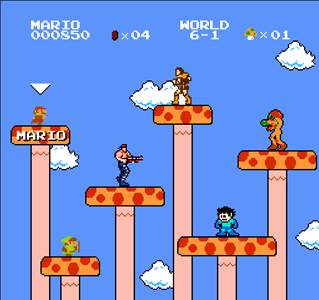 All character having some common ability, step on enemy, hit the block with head. But the game is well design where each of the character have special ability on their own, which is exactly same as in their game. All character starts with basic ability, e.g. Mega Man can do slide, can’t do charge shot, Bill using only basic gun. After get the mushroom power-up, they will get a new ability, Mega Man can now do charge shot, Bill using a machine gun, while flower power-up made them have the special ability, Mega Man using fire shot from the fire boss, Bill using shot gun. Each character’s power-up will retain as the game proceed, unless game over.

This game can even let user to change control key (most of the Flash game don’t, I hate to play game using arrow key), and even save/load game state, awesome!